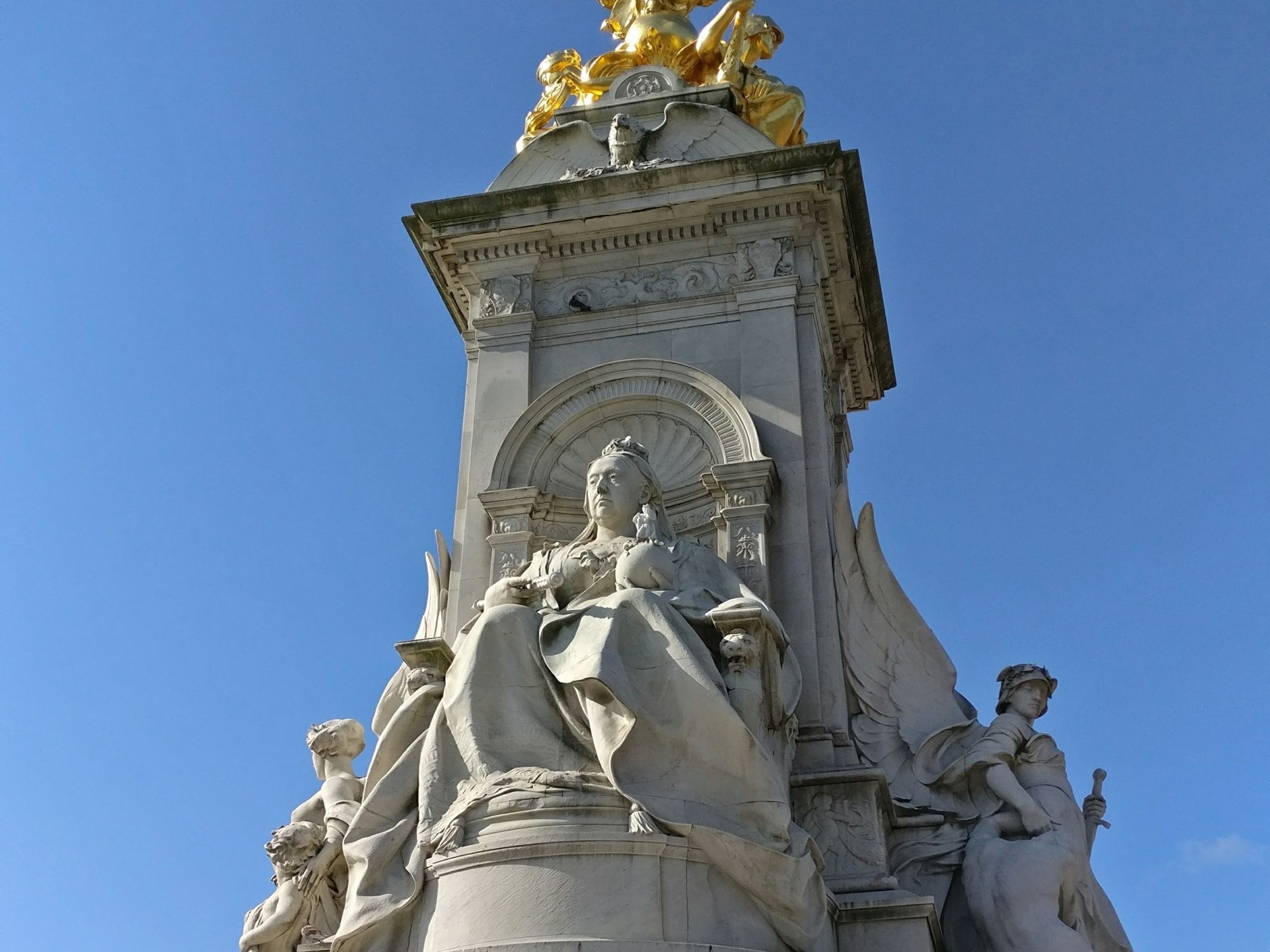 This was the first day on our journey. Honestly it hadn’t quite hit me until early in the morning when I was getting ready. Standing in front of that bus to Vancouver, taking that first step onto the bus made me nervous. The previous night Mihai had asked me if I was excited. Up to then the only thing I could feel was the anticipation and reluctance similar to when jumping into a cold pool. I knew everything was going to be fine; I was happy with the route, I had all the major tickets and reservations already taken care of and I picked a good traveling partner. However the anticipation was still prevalent. Thankfully it started to subside when we got past the border to Canada.

We were going to spend the night in Vancouver because the flight from Vancouver through Calgary to London was half as cheap as going direct from Seattle. Arriving in Vancouver at 3PM we had half a day to kill. We took the Sky Train and walked to our hostel and checked in. On our way over I recognized an area that we I had spent a lot of time in previously. I was up in Vancouver years ago for the festival Seasons and Celebrities was a club that we ended up at after every performance. Right next to the club is a falafel, doner, shawarma restaurant at which Nathan and I would default to at the end of the night. Thankfully the food was just as good as my inebriated self remembered.

“Holy shit!” I turned to Coleman in excitement.

I had just remembered the Richmond night market was going until October. The stars had aligned for me just as we were about to wonder what the hell we were going to do for the next 6 hours. It was however a little too early for us to head down to Richmond so we stopped for a drink at Lennox Pub, a pub we had visited previously with a large group of our college friends not more than a year ago.

After we finished our beer, we took the Sky Train over to Richmond and headed into the night market. The Richmond night market is a strange mix of Chinese, English and Disneyland. The latter of which was probably the most jarring. Disneyland music lifted straight from the parades played throughout the night market as people were laughing and eating. The food was amazing and satisfied my rare need to feel Chinese. Richmond has such a vibrant Chinese community that the demand authentic food was high.

We headed back to Vancouver around 9PM and decided poutine was necessary. Coleman had remembered a poutine place from a while back I was determined to find it. We thought it had shut down until we happened to walk by it on our way home. I suggested out a bunch of odd options that I found on the menu and Coleman eventually ordered country-styled poutine which had mushrooms, peas, onions and diced chicken over fries and gravy. Weird combination but it was delicious. After that we went back to the hostel as we had an early morning.

Hostel had some bagels and such that we could eat in the morning and we took off to the airport (YVR). We had an extremely long day of traveling ahead of us. Our plane to Calgary was short and we both feel asleep for the entire duration of the flight. However we had a 6 hour layover before our flight to London. The airport in Calgary was huge and newly renovated but it was a complete ghost town. It had an interesting people mover shuttle system that ran through the main backbone of the airport. Shuttles drove on dedicated blocked off paths up and down the main terminal stopping like a subway at each terminal. We had lunch and then found an area with a bunch of one seater couches and pushed them together to make small beds. We stayed at those makeshift beds until our flight boarded. Finally we got on our 9 hour flight to London.

Arriving in Gatwick we got lost trying to find a train to the main city. Turned out to be much less complicated then we made it out to be. We beelined to our Hostel in East London just north of the City of London to check-in and drop off our stuff. We absolutely needed to stay up for as long as possible in order to deal with jet lag. So we made our way south to the Monument to the Great Fire of London next to the London Bridge. I mistook London Bridge for the Tower Bridge which is apparently a common mistake. Luckily the Tower Bridge was just right around the corner along the Thames River.

It was on this bridge that we got our first good look at the city and when it finally hit me that we were just beginning our travels. I was looking forward to our coming weeks. However at that moment I was more looking forward to bed. It was around 5PM but Coleman was fading quite fast. This was his first big time jump so I could tell that he was about to collapse. That and the fact that we had an exchange with one of the people that worked in the Underground and I don’t think he registered a single word. I wasn’t about to provide enough energy to fuel both of us so I decided to call it good and we headed home for crash after a 30 hour day.

Due to jet lag, Coleman woke me up at what he thought was 8AM when in reality it was midnight. I laughed and poked fun at his disorientation but then we decided to take a walk and get some food. I’ll admit I was probably going to be up not long after that anyway. Only thing that was open for food was a McDonald’s at the nearby train station. I had made an argument earlier that McDonald’s in a foreign country is always something worth doing. Every area has some strange sandwich or sauce that you likely will never in the U.S. so we went in and grabbed something. We both got what was basically a super fancy McChicken on ciabatta bread with arugula. I would have taken that over a regular McChicken anyday. After that we found a small hole in the wall bar and had a beer before returning to our hostel.

Real morning came around and we headed straight to St. James Park. To our great pleasure the weather was clear and sunny as we walked over west towards our first stop of the day. The Victoria Memorial and Buckingham Palace was beautiful that morning. After admiring the surroundings for a bit we sat at the steps in front of Queen Victoria and just talked for an hour while watching the tourists shuffle in and out.

Around noon we headed west to the Hyde Park stopping at every WW1 and WW2 monument along the way. 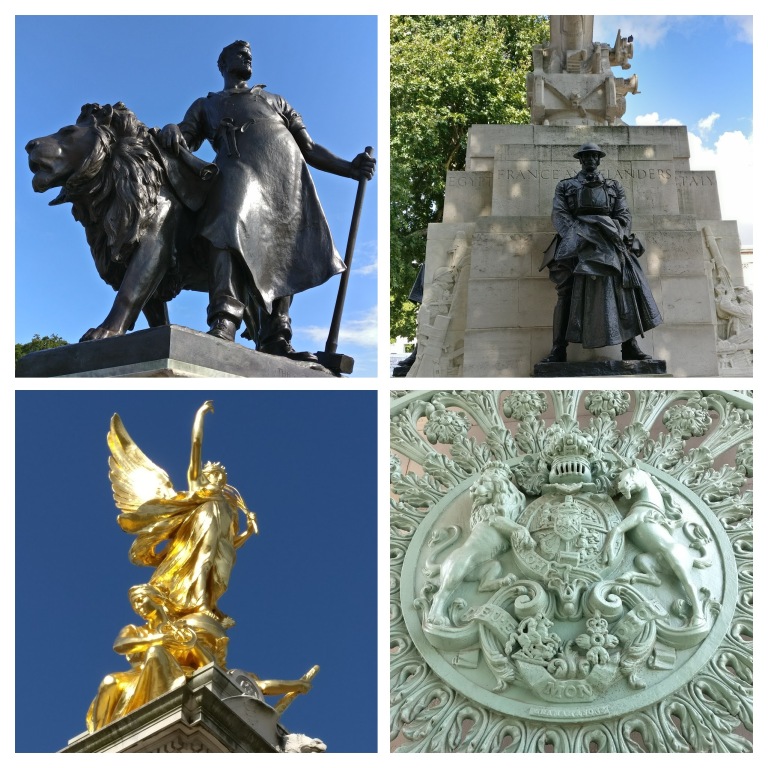 The lake in the park was much larger than we anticipated but the weather was still nice so we took our time and we walked around it. Halfway around I felt obligated to get a cup of tea as we were in England and Coleman followed suite. The Princess Diana memorial was unfortunately a little lackluster in my opinion. It was essentially a circular waterfall over textured stone that gave it the look of rapids. I would have thought that for someone so revered, a more fitting display would have been made. While on one of the benches Coleman and I got into a deep talk about where we want to go and do and

At around 2PM we were hungry for just about anything so we stopped at a diner in one of the near by train stations and had lunch while continuing our conversations from the morning. Earlier I had decreed that we needed to get our train tickets to Paris as soon as we could, so we took a trip up to St. Pancras/King’s Cross. While in King’s Cross we stopped by the fabled Platform 9 3/4 from Harry Potter! 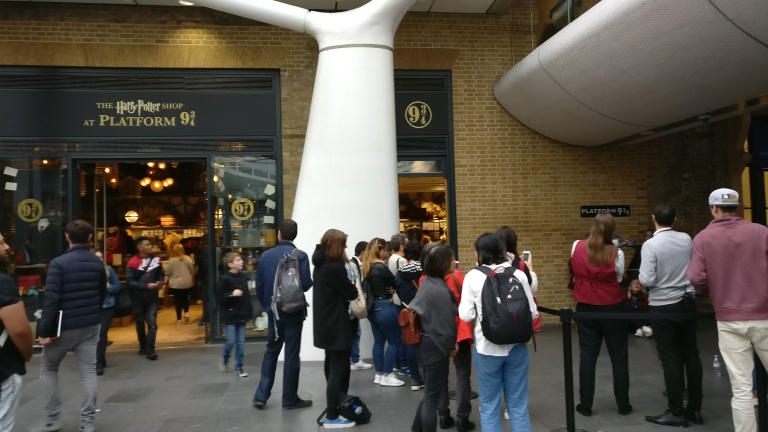 We both bought pens from our respective houses, I Slytherin, he Ravenclaw and then headed back into the underground. We trained down to Trafalgar square and stopped by the National Portrait Gallery. At this point, our jetlag was coming back around again so we decided that we could take the Disneyland approach and nap but we had to make sure it stayed a nap. So we did just that and at around 8PM we headed back out to Black Friar and found a pub. After about 2 hours at the pub, we were craving food and so we stopped by for KFC on the way home and then crashed. Coleman at some point on the way home told me our final step count for the day; 30,000 and about 14miles.

Our train to Paris was scheduled to depart at 2:30PM so we had a morning free. The changing of the Buckingham Palace guards takes place every other day during the summer so we thought it would be a fitting end to our time in London. It was nice outside once again as we ventured over to St. James Park and then walked over to Buckingham Palace. At around 11:00AM the ceremony started but at that time we had already arrived too late to stand right at the palace fence. The best we could do was catch the guards on the way out as they were changing from their post south of the palace. The soldiers marched past and I was pleasantly surprised to spot a few women in the Queen’s Guard.

After the ceremony we left back to our hostel, grabbed our bags and set out for Paris. Our time in London was short but we’ll be back at the end of the trip for one more day as our flight back home would be from London.